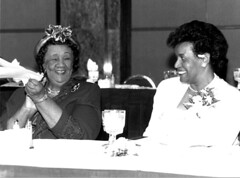 Kweisi Mfume became President and Chief Executive Officer of the National Association for the Advancement of Colored People (NAACP) on February 20, 1996, after being unanimously elected to the post by the NAACP’s Board of Directors. Mr. Mfume gave up his seat in the United States Congress where he had, for ten years, represented Maryland’s 7th Congressional District, to assume the NAACP presidency.

Overcoming the tragedy of her husband’s death and finally after 30 years receiving a life-sentence for the accused, Evers became Chairman of the Board for the NAACP and launched a massive campaign to register one million new black voters before the 1996 elections.

Mineta, the first Asian Pacific American to serve as Secretary of Commerce under President Clinton, was also a member of the U.S. House of Representatives, representing the heart of California’s Silicon Valley. In 1995, he was awarded the Martin Luther King, Jr. Commemorative Medal for his contributions to the field of civil rights.