The Leadership Conference was founded in 1950 as the Leadership Conference on Civil Rights by A. Philip Randolph, head of the Brotherhood of Sleeping Car Porters; Roy Wilkins of the NAACP; and Arnold Aronson, a leader of the National Jewish Community Relations Advisory Council. Their visionary leadership was grounded in their commitment to social justice and the firm conviction that the struggle for civil rights would be won not by one group alone, but through coalition. 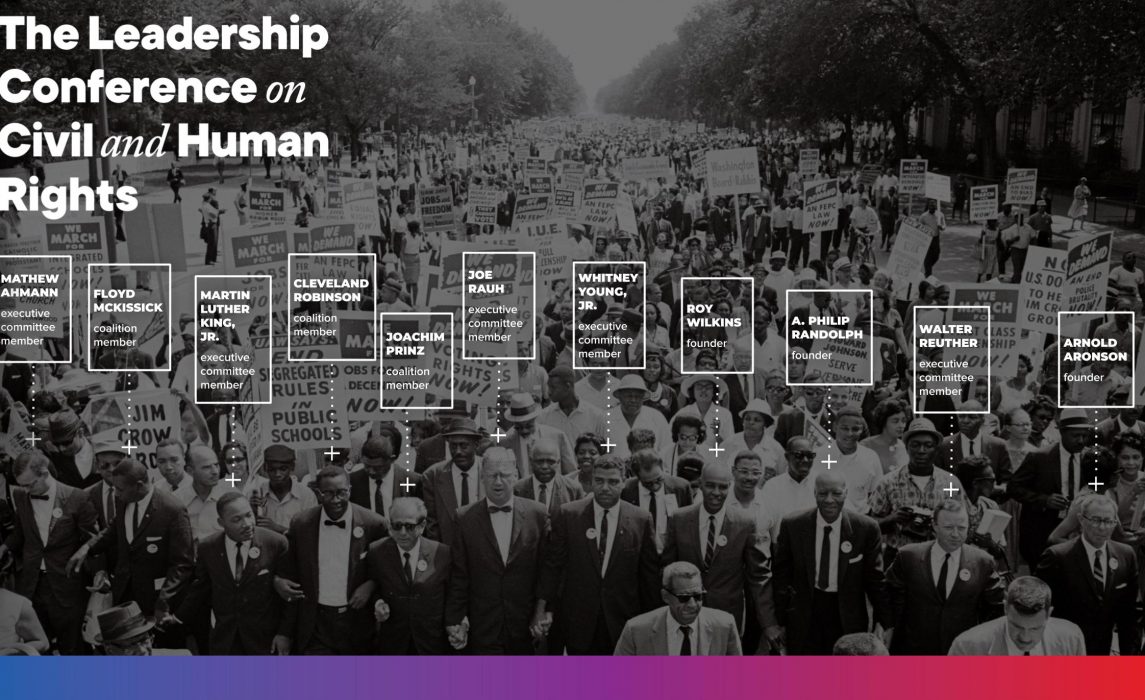 Our founders, members of our executive committee, and coalition partners were on the front lines of the 1963 March on Washington for Jobs and Freedom in Washington, D.C. Bayard Rustin and Dr. Dorothy Height, who are not pictured but would both later become chairs of The Leadership Conference, were central figures in organizing the march and its program.

These laws transformed the nation, outlawing discrimination in nearly every facet of American life, and made it more fair and equitable for all.

For nearly 70 years, we’ve led the fight for equal opportunity and social justice.

Today, The Leadership Conference remains the nation’s oldest, largest, and most diverse civil and human rights coalition, committed to the protection and advancement of civil and human rights for every person in the United States. It has become the nerve center for fighting discrimination in all its forms and expanding opportunity and fairness for all Americans. The Education Fund complements this work by building public will for federal policies that promote and protect the civil and human rights of all people in America. Its campaigns empower and mobilize advocates around the country to push for progressive change in the United States.

Upon the U.S. House of Representative’s passage of the Civil Rights Act of 1964 (H.R. 7152), Dr. Martin Luther King, Jr. sent this telegram to our coalition: The passage of H.R. 7152 is tribute to the able and dedicated work of the Leadership Conference on Civil Rights. As you prepare for the job ahead in the Senate I join the millions of civil rights devotees around the country in expressing my sincere gratitude to each of you for your work in Washington.