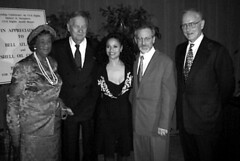 By the beginning of the 20th century, Spielberg was mainstream Hollywood’s most famous, influential, and successful director, creating three of the centuries most powerful films- 1985’s “The Color Purple,” based on Alice Walker’s novel about an abused black woman in the early 1900s South, the widely acclaimed Holocaust drama “Schindler’s List” (1993), for which he won an Academy Award, and later explored a slave revolt and trial in “Amistad” (1997).

Allen became the Houston Foundation for Ballet first black dancer in 1964 admitted on a full scholarship. Continuing her creative activism, in 1997 she realized a decades-long dream by producing Steven Spielberg’s epic AMISTAD and the following year, she directed the musical “Brothers of the Knight” at the Kennedy Center in Washington, D.C.

As chairman of the Rebuild America Coalition, Mayor Lanier is leading 60 public and private organizations in a national campaign to raise public awareness, his program Neighborhoods to Standard (NTS), has resulted in the revitalization of 57 neighborhoods in downtown Houston in four years, and is commended for his outstanding leadership of the campaign last year to defeat Houston’s anti-affirmative action ballot initiative.