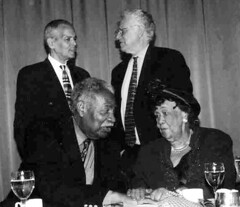 Ossie Davis and LCCR Chair Dr. Dorothy I. Height with Julian Bond, Chairman of the NAACP Board and William Taylor, at the Hubert H. Humphrey Civil Rights Award.

Elected Washington’s 21st governor on Nov. 5, 1996, making him the first Chinese-American governor in U.S. history, Locke has worked to make Washington public schools the best in the nation, promote jobs and economic development in rural and urban areas, and fight juvenile crime.

Close friends of Martin Luther King Jr., Davis and Dee are celebrated as “national treasures” for their efforts – often breaking new ground for African Americans – serving as masters of ceremonies for the historic 1963 March on Washington, risking their careers resisting McCarthyism, their activism led to their arrest for protesting the killing in New York of a Guinean immigrant, their suing in federal court for black voting rights, and their speaking out for citizen involvement in democracy and in support of sickle cell disease research.

A woman of extraordinary courage, commitment, and compassion, as evidenced by her single-handed and selfless defense of Oumar Dia–a victim of a brutal and senseless attack shows her outstanding leadership, commitment, and action to pursue justice and racial harmony in the community, for her unwavering bravery in the face of extreme adversity, and for her ability to remind us by example of the “best” in each of us.