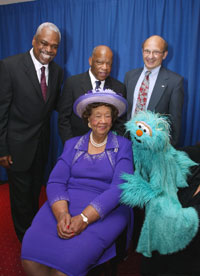 This year, LCCR honored Rep. John Lewis, a life-long champion of civil rights; Northwestern University’s Medill Innocence Project and the Center on Wrongful Convictions, whose investigative efforts have changed the way the nation views the death penalty; and Sesame Workshop, the nonprofit organization behind “Sesame Street,” whose educational media and research has taught the country how to respect and celebrate its diversity.

These outstanding champions of civil rights are vivid symbols of how the past has informed our current initiatives, how the present holds particular challenge to all who believe in civil rights, and how our future success will depend on new leaders to advance social justice.

Representative Lewis (serving Georgia’s Fifth District) is a life-long champion of civil rights. An Alabama sharecropper’s son, he helped organize the lunch counter sit-ins, the Freedom Rides, and the Selma-to-Montgomery voting rights march. As chairman of the Student Nonviolent Coordinating Committee and executive director of the Voter Education Project, he maintained his faith in peaceful protest in spite of brutal beatings. An unwavering voice for equality and simple justice, John Lewis continues serve the nation through his steadfast efforts to build “the beloved community.”

The investigative efforts of Northwestern students and faculty led to the commutation of 167 death sentences in Illinois and changed the way our nation views the death penalty. Professor Larry Marshall, founder and director of the Center on Wrongful Convictions, accepted the award on behalf of Northwestern University.

In giving generations of children a glimpse into a world that promotes equality, celebrates diversity, and encourages mutual respect, the producers of “Sesame Street” have mirrored the values and mission that are at the heart of LCCR, winning well-deserved recognition from various members of the coalition over the years. A respected leader in research on child development and education, as well as the producer of exemplary programming, the Workshop is being saluted by LCCR for teaching the young in years and the young at heart how to respect and revel in our diversity. Sesame Workshop CEO Gary Knell is pictured.