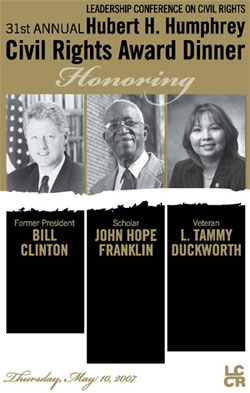 The 2007 Hubert H. Humphrey Civil Rights Award Dinner was held on Thursday, May 10, 2007, at the Hilton Washington & Towers in Washington, D.C.

The Humphrey Award – now in its 31st year – is the civil rights community’s highest honor. Recipients are selected in recognition of their distinguished contributions to the advancement of civil and human rights.

This year’s extraordinary honorees represent the best of America, exhibiting passion, courage and conviction, and recognizing our nation’s strength without papering over its weaknesses. In the spirit of civil rights pioneer Hubert H. Humphrey, they are guides along our national road to an equal and just society.

President Clinton put civil rights back on the national agenda, initiating One America, a national dialogue on race and equality; upon leaving office, he took this vision abroad. With groundbreaking scholarship, Dr. Franklin has documented the African American struggle to have America embrace its democratic ideals. Tammy Duckworth has called us to a higher standard of civil rights protections for our veterans and all Americans.

Continuing the work he started as governor of Arkansas and President of the United States, Bill Clinton remains committed to protecting and raising the profile of civil and human rights at home and abroad through the work of his foundation and its initiatives.  After leaving the White House, President Clinton established the William J. Clinton Foundation with the mission to strengthen the capacity of people in the United States and throughout the world to meet the challenges of global interdependence, addressing HIV/AIDS around the world, childhood obesity in the United States, climate change and poverty.  As with all of his efforts, he brings attention and resources to vital issues, but also raises the conscience of the nation and the world. The Clinton Presidential Center, located in Little Rock, Arkansas, is comprised of the Library, the archives, Clinton Foundation offices and the Clinton School of Public Service.

The Clinton Global Initiative, a non-partisan catalyst for action, brings together a community of global leaders to devise and implement innovative solutions to some of the world’s most pressing challenges. Current and former heads of state, along with hundreds of other leaders from governments, the business community, and NGOs contribute to innovative solutions to alleviate poverty, promote effective governance, reconcile religious conflicts, and protect the environment. To date, over 500 commitments have been made, valued at nearly $10 billion.  LCCR recognizes Bill Clinton for putting civil and human rights on the national agenda, and providing an avenue for all of us to have a stake in this fight.

As an author, educator and historian, Dr. John Hope Franklin has woven blacks into the tapestry of American history through such pioneering works as From Slavery to Freedom, and his most recent publication, Mirror to America: The Autobiography of John Hope Franklin.  Appointed to One America: the President’s Initiative on Race by President Clinton, Dr. Franklin opened a national dialogue on race and equality.

Dr. Franklin has served as President of The American Studies Association, the Southern Historical Association, and the American Historical Association. In addition to many awards, Dr. Franklin has received honorary degrees from more than one hundred colleges and universities.  The establishment of the John Hope Franklin Center for Interdisciplinary and International Studies at Duke University in 2000 continues Dr. Franklin’s work and legacy.  Dr. Franklin’s work has and continues to be a guide along our national road to an equal and just society.  LCCR is honored to recognize the man who has made sure that the story of America includes the stories of us all.

Ladda “Tammy” Duckworth has served our nation with unparalleled distinction, both in uniform and in her public service. Having lost both legs when her Blackhawk helicopter was shot down in Iraq, she boldly entered a life of public service. She ran for Congress from the State of Illinois in 2006, calling for equal access to quality health care and education, and common-sense immigration reform. After a narrow loss on Election Day, she was appointed by Governor Rod R. Blagojevich as Director of the Illinois Veterans’ Affairs Department and has exhorted our nation to recognize the dedication and sacrifices of American soldiers, and the debt we owe them. She also serves as a major in the Illinois National Guard.

From 1991 to 2001, Director Duckworth coordinated the Center for Nursing Research at Northern Illinois University.  She was the Manager for the Club and District Administration Department for Rotary International’s Asia-Pacific Region from 2002 to 2004.  As a soldier, Director Duckworth received the Purple Heart, the Air Medal, the Army Commendation Medal, the Meritorious Service Medal, and the National Defense Service Medal, along with other decorations, citations and badges.

She is a published author with textbook chapters and articles on the effects of Environmental Radon and Lung Cancer. LCCR commends Director Duckworth’s tireless efforts to make the health and welfare of our returning veterans a priority and we are honored to celebrate this staunch protector of civil rights.