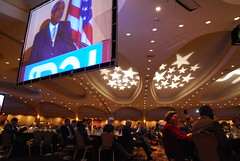 “As we gather this evening, with so much to rejoice in and so much to rededicate ourselves to, we can take pride that this is still the same civil and human rights coalition, but with new victories, new constituencies, new technologies, and a wider focus than ever before. And we can take even greater pride that, thanks to our work, this is not the same America because the land we love is moving closer to the ideals we share,” said Wade Henderson, Leadership Conference president and CEO, during his opening remarks.

Former Senator Bob Dole, R. Kan., and New York Times columnist Thomas Friedman introduced the honorees, Sheila Bair and Van Jones, who both spoke about their commitments to civil rights.  Bair talked about how her background as a civil rights lawyer influences her work as the chairman of the FDIC and Jones spoke about how his commitment to finding jobs for low-income Americans in Oakland, Calif., led him to the “green jobs” movement.

Ms. Bair is the chairman of the Federal Deposit Insurance Corporation (FDIC), which plays a pivotal role in insuring and supervising the nation’s financial institutions.

With today’s financial crisis affecting everyone from individual homeowners to some of the largest banks in the country, Chairman Bair and her agency have moved to the forefront of the government’s response. Standing at the vanguard, Chairman Bair was one of the first people to take notice and speak against an alarming trend in aggressive lending practices, warning of the need for more regulation to protect consumers.

He was recently selected to serve as special advisor for green jobs, enterprise and innovation at the White House Council on Environmental Quality. He is the founder of Green For All, a national organization dedicated to building an inclusive green economy strong enough to lift people out of poverty. Green For All grew out of a “Green Job Corps” program at the Ella Baker Center for Human Rights, which he co-founded.