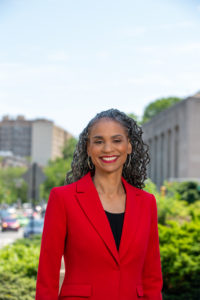 Maya Wiley is a nationally respected civil rights attorney and activist who has dedicated her life to the fights for justice, equality, and fairness.

Wiley’s father was a leader in the civil rights and economic justice movements, and she has been a leader inside and outside government. Serving as the first Black woman counsel to the mayor of New York City, she helped deliver on civil and immigrant rights. During her tenure, the city also saw an expansion of minority/women-owned business enterprises contracts. Following her time at City Hall, Wiley moved to academia as a faculty member and senior vice president for social justice at the New School University. While there, she chaired the New York City Civilian Complaint Review Board (CCRB). As chair, she led the release of the “hold” on proceedings against Daniel Pantaleo whose illegal chokehold killed Eric Garner. That move led to the CCRB’s successful administrative prosecution of Pantaleo that resulted in his firing. Wiley’s tenure at the CCRB was marked by increased case closure rates, increased transparency, and an intense focus on public outreach so that potential victims of police abuse were aware of ways to seek the board’s assistance. In 2021, Wiley was a candidate for New York City mayor.

As a Henry Cohen professor of public and urban policy at the New School, Wiley founded the Digital Equity Laboratory on universal and inclusive broadband. She also served as a legal analyst for NBC News and MSNBC.

Early in her career, Wiley worked at the ACLU and the NAACP Legal Defense & Educational Fund, Inc., where she focused on multiple racial justice issues. She also worked in the Civil Division of the U.S. Attorney for the Southern District of New York. Following the September 11 attacks, Wiley co-founded the nonprofit Center for Social Inclusion, an organization that focused on transforming structural racism into fair opportunity at the intersection of race and poverty as it relates to education, the digital divide, land use planning, the green economy, and more. Wiley was also a senior advisor on race and poverty at the Open Society Foundations.

Wiley earned her B.A. from Dartmouth College and her J.D. from Columbia Law School. She lives in Brooklyn with her partner, Harlan, and their two daughters and cats.

Return to our staff ›