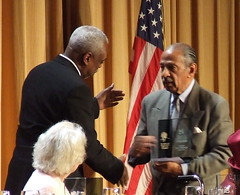 “This year, as the Leadership Conference addresses issues of equality and inclusion in protecting civil and human rights, we are pleased to recognize three remarkable individuals who have been steadfast in their efforts to amplify the voices of those at the margins of our economy and our society,” said Wade Henderson, president of LCCR.

Henderson noted that 2008 marks the 40th anniversary of the Fair Housing Act, a cornerstone of civil rights legislation. “Representative Conyers’ advocacy for the Act and its amendments, Patricia Rouse’s unflagging efforts to support fair housing, and Soledad O’Brien’s pivotal role in telling the stories of Katrina’s homeless make these honors all the more fitting. We have much further to go on the road to housing equality, and our honorees are among those who are leading the way. Our nation’s minorities, the poor and the disenfranchised have no stronger advocates than this year’s Humphrey Awardees.”

Representative John Conyers has served in the House since 1964, representing Michigan’s 14th District.

A leader throughout our nation’s civil rights struggles and a founding member of the Congressional Black Caucus, Representative Conyers has been a relentless voice for equality and equal opportunity. He has fought to protect working families, ensure equal pay for women and minorities, increase the minimum wage, address hate crimes and violence against women, and promote meaningful enforcement of the Fair Housing Act.

A champion of health care reform, he is leading the fight to ensure that every American, regardless of income, employment status, or race, has access to quality, affordable health care. More about John Conyers, Jr.

Patricia Rouse, as the co-founder of Enterprise Community Partners, has been a tireless advocate for fair and affordable housing, paving the way for countless low-income families to move from poverty to the mainstream of American life.

She was appointed by President George H.W. Bush to serve on the Commission on National and Community Service, has been a board member of the National Committee Against Discrimination in Housing and served on many Maryland and national boards of organizations dedicated to equality and opportunity in housing.

In the spirit of the Leadership Conference, she is a coalition builder, forging strong partnerships with diverse stakeholders to protect the poor, working class families, the homeless, the elderly and those displaced by natural disasters. More about Patricia Rouse

Soledad O’Brien is an anchor and special correspondent for CNN’s Special Investigations Unit, delivering in-depth reports on current events and showing the human face of those affected by critical social and economic developments. Her highly acclaimed documentary of Martin Luther King offered fresh investigative insights regarding his writings and his life’s work.

Ms. O’Brien has been lauded for sharing with America the personal stories of people caught up in the aftermath of the Katrina hurricane and the related housing shortage; the Southeast Asia tsunami; and the contested vote counts of 2004.

As CNN point-person during President George W. Bush’s visit to Mexico, she delivered a series of eye-opening reports on conditions that are fueling the immigration crisis. Her objective and far-reaching coverage of topical issues has contributed to the dialogue over countless civil and human rights issues. More about Soledad O’Brien